Today we’re releasing React Native version 0.71! This is a feature-packed release including:

In this post we’ll cover some of the highlights of 0.71.

We are excited to release a new version of React Native, 0.70.0. This version comes with several improvements like a new unified configuration for Codegen, Hermes as default engine, and full CMake support for Android builds along with a refresh of the documentation for the New Architecture. Read on to learn more!

Last October, we announced that we had started work towards making Hermes the default engine for all React Native apps.

Hermes has provided a lot of value to React Native inside of Meta, and we believe the open-source community will benefit as well. Hermes is designed for resource constrained devices and optimizes for start up, app size, and memory consumption. One key difference between Hermes and other JS engines is its ability to compile JavaScript source code to bytecode ahead of time. This precompiled bytecode is bundled inside the binary, and saves the interpreter from having to perform this expensive step during app startup.

Since the announcement, a lot of work has gone into making Hermes better, and today, we are excited to share that React Native 0.70 will ship with Hermes as the default engine. This means that all new projects starting on v0.70 will have Hermes enabled by default. With the rollout coming up in July, we want to work closely with the community and make sure the transition is smooth and brings value to all users. This blogpost will go over what you can expect from the change, performance benchmarks, new features, and more. Note that you don’t need to wait for React Native 0.70 to start using Hermes - you can follow these instructions to enable Hermes on your existing React Native app.

Note that while Hermes will be enabled by default in new React Native projects, support for other engines will continue.

We are excited to release a new version of React Native, 0.69.0. This version comes with several improvements for the New Architecture of React Native and new features: React 18 support & bundled Hermes. Read on to learn more!

Hello everyone! Today we are announcing the 0.68.0 release of React Native, with opt-in to the New React Native Architecture, bug fixes and more.

Happy new year everyone! Today we are announcing the latest release of React Native, 0.67.0, along with some updates on the release process that we have been working on in the past few months.

Hermes, Facebook’s open source JavaScript VM optimized for React Native, has been upgraded to version 0.8.1. Some of the stand-out features in this release are:

You can find the full Hermes changelog here.

Follow steps here to opt-in your app to Hermes if you haven’t already to leverage these new features and gains!

Last year Facebook took the GAAD pledge to improve accessibility within React Native. 0.65 shares the results of this pledge and other accessibility wins! Some notable changes include:

You can follow along or contribute to our outstanding accessibility issues here!

This release includes over 1100 commits from 61 contributors. Thank you to everyone who has contributed and supported this release! You can find the full changelog here.

Today we’re releasing React Native 0.64 that ships with support for Hermes on iOS.

Hermes is an open source JavaScript engine optimized for running React Native. It improves performance by decreasing memory utilization, reducing download size and decreasing the time it takes for the app to become usable or “time to interactive” (TTI).

With this release, we are happy to announce that you can now use Hermes to build on iOS as well. To enable Hermes on iOS, set hermes_enabled to true in your Podfile and run pod install.

Please keep in mind that Hermes support on iOS is still early stage. We are keeping it as an opt-in as we are running further benchmarking. We encourage you to try it on your own applications and let us know how it is working out for you!

Inline Requires is a Metro configuration option that improves startup time by delaying execution of JavaScript modules until they are used, instead of at startup.

This feature has existed and been recommended for a few years as an opt-in configuration option, listed in the Performance section of our documentation. We are now enabling this option by default for new applications to help people have fast React Native applications without extra configuration.

More information about Inline Requires is available in the Performance documentation.

Over the last year Facebook has sponsored the Major League Hacking fellowship, supporting contributions to React Native. Jessie Nguyen and Saphal Patro added the ability to use the Performance tab on Chrome DevTools to visualize the execution of your application when it is using Hermes.

For more information, check out the new documentation page.

We have added Proxy support to Hermes, enabling compatibility with popular community projects like react-native-firebase and mobx. If you have been using these packages you can now migrate to Hermes for your project.

We plan to make Hermes the default JavaScript engine for Android in a coming release so we are working to resolve the remaining issues people have when using Hermes. Please open an issue on the Hermes GitHub repo if there are remaining issues holding back your app from adopting Hermes.

React 17 does not include new developer-facing features or major breaking changes. For React Native applications, the main change is a new JSX transform enabling files to no longer need to import React to be able to use JSX.

More information about React 17 is available on the React blog.

Thank you to the hundreds of contributors that helped make 0.64 possible! The 0.64 changelog includes all of the changes included in this release.

Today we’re releasing React Native 0.63 that ships with LogBox turned on by default.

We’ve heard frequent feedback from the community that errors and warnings are difficult to debug in React Native. To address these issues we took a look at the entire error, warning, and log system in React Native and redesigned it from the ground up. 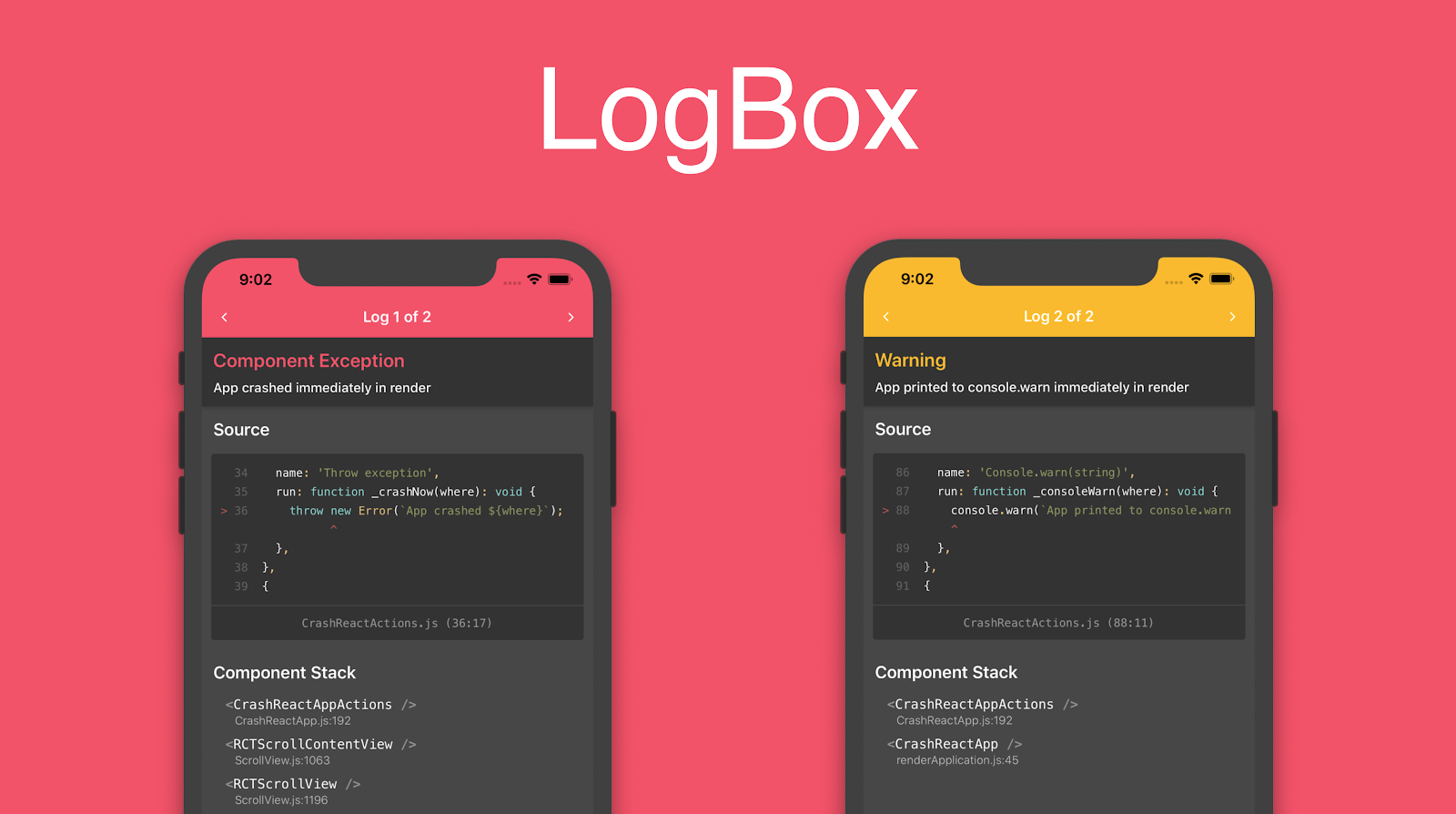 LogBox addresses complaints that errors and warnings were too verbose, poorly formatted, or unactionable by focusing on three primary goals:

To achieve these goals, LogBox includes:

We’ve wrapped all of these features into an improved visual design that’s consistent between errors and warnings and allows paginating through all logs in one enjoyable UI.

With this change we’re also deprecating YellowBox in favor of LogBox APIs:

In 0.63, we will warn when using these deprecated modules or methods. Please update your call sites off of these APIs before they are removed in 0.64.

For more information on LogBox and debugging react native, see the docs here.

React Native is built to enable applications to meet user’s expectations of the platform. This includes avoiding “tells”—little things that give away that the experience was built with React Native. One major source of these tells has been the Touchable components: Button, TouchableWithoutFeedback, TouchableHighlight, TouchableOpacity, TouchableNativeFeedback, and TouchableBounce. These components make your application interactive by allowing you to provide visual feedback to user interactions. However, because they include built-in styles and effects that don’t match the platform interaction, users can tell when experiences are written with React Native.

Further, as React Native has grown and our bar for high-quality applications has gone up, these components haven't grown with it. React Native now supports platforms like Web, Desktop, and TV, but support for additional input modalities has been lacking. React Native needs to support high-quality interaction experiences on all platforms.

To address these problems, we are shipping a new core component called Pressable. This component can be used to detect various types of interactions. The API was designed to provide direct access to the current state of interaction without having to maintain state manually in a parent component. It was also designed to enable platforms to extend it's capabilities to include hover, blur, focus, and more. We expect that most people will build and share components utilizing Pressable under the hood instead of relying on the default experience of something like TouchableOpacity.

A simple example of a Pressable component in action

You can learn more about it from the documentation.

Every native platform has the concept of system-defined colors. Colors that automatically respond to system theme settings such as Light or Dark mode, accessibility settings such as a High Contrast mode, and even its context within the app such as the traits of a containing view or window.

While it is possible to detect some of these settings via the Appearance API and/or AccessibilityInfo and set your styles accordingly, such abstractions are not only costly to develop but are approximating the appearance of native colors. These inconsistencies are particularly noticeable when working on a hybrid application, where React Native elements co-exist next to the native ones.

React Native now provides an out-of-the-box solution to use these system colors. PlatformColor() is a new API that can be used like any other color in React Native.

For example, on iOS, the system provides a color called labelColor. That can be used in React Native with PlatformColor like this:

Sets the color of the Text component to labelColor as defined by iOS.

Android, on the other hand, provides colors like colorButtonNormal. You can use this color in React Native with:

Sets the background color of the View component to colorButtonNormal as defined by Android.

You can learn more about PlatformColor from the documentation. You can also check the actual code examples present in the RNTester.

DynamicColorIOS is an iOS only API that lets you define which color to use in light and dark mode. Similar to PlatformColor, this can be used anywhere you can use colors. DynamicColorIOS uses iOS’s colorWithDynamicProvider under the hood.

Changes the text color based on the system theme

You can learn more about DynamicColorIOS from the documentation.

After over four years from its release, we are dropping support for iOS 9. This change will allow us to move faster by being able to reduce the number of compatibility checks that need to be placed in the native code to detect whether a given feature was supported on a certain iOS version. With its market share of 1%, it shouldn’t have much negative impact on your customers.

At the same time, we are dropping support for Node 8. Its LTS maintenance cycle expired in December 2019. The current LTS is Node 10 and it is now the version that we are targeting. If you are still using Node 8 for the development of React Native applications, we encourage you to upgrade in order to receive all the latest security fixes and updates.

Thank you to the hundreds of contributors that helped make 0.63 possible!

To see all the updates, take a look at the 0.63 changelog.