Skip to main content
This is documentation for React Native 0.62, which is no longer actively maintained.
For up-to-date documentation, see the latest version (0.66).
Version: 0.62

React Native is like React, but it uses native components instead of web components as building blocks. So to understand the basic structure of a React Native app, you need to understand some of the basic React concepts, like JSX, components, state, and props. If you already know React, you still need to learn some React-Native-specific stuff, like the native components. This tutorial is aimed at all audiences, whether you have React experience or not.

Let's do this thing.

In accordance with the ancient traditions of our people, we must first build an app that does nothing except say "Hello, world!". Here it is:

If you are feeling curious, you can play around with sample code directly in the web simulators. You can also paste it into your App.js file to create a real app on your local machine.

Then we find the HelloWorldApp function, which is a functional component and behaves in the same way as in React for the web. This function returns a View component with some styles and aText as its child.

The Text component allows us to render a text, while the View component renders a container. This container has several styles applied, let's analyze what each one is doing.

Some of the things in here might not look like JavaScript to you. Don't panic. This is the future.

First of all, ES2015 (also known as ES6) is a set of improvements to JavaScript that is now part of the official standard, but not yet supported by all browsers, so often it isn't used yet in web development. React Native ships with ES2015 support, so you can use this stuff without worrying about compatibility. import, from, class, and extends in the example above are all ES2015 features. If you aren't familiar with ES2015, you can probably pick it up by reading through sample code like this tutorial has. If you want, this page has a good overview of ES2015 features.

The other unusual thing in this code example is <View><Text>Hello world!</Text></View>. This is JSX - a syntax for embedding XML within JavaScript. Many frameworks use a specialized templating language which lets you embed code inside markup language. In React, this is reversed. JSX lets you write your markup language inside code. It looks like HTML on the web, except instead of web things like <div> or <span>, you use React components. In this case, <Text> is a Core Component that displays some text and View is like the <div> or <span>.

So this code is defining HelloWorldApp, a new Component. When you're building a React Native app, you'll be making new components a lot. Anything you see on the screen is some sort of component.

Most components can be customized when they are created, with different parameters. These creation parameters are called props.

The other new thing going on here is the View component. A View is useful as a container for other components, to help control style and layout.

With props and the basic Text, Image, and View components, you can build a wide variety of static screens. To learn how to make your app change over time, you need to learn about State.

Unlike props that are read-only and should not be modified, the state allows React components to change their output over time in response to user actions, network responses and anything else.

What's the difference between state and props in React?​

In a React component, the props are the variables that we pass from a parent component to a child component. Similarly, the state are also variables, with the difference that they are not passed as parameters, but rather that the component initializes and manages them internally.

Are there differences between React and React Native to handle the state?​ 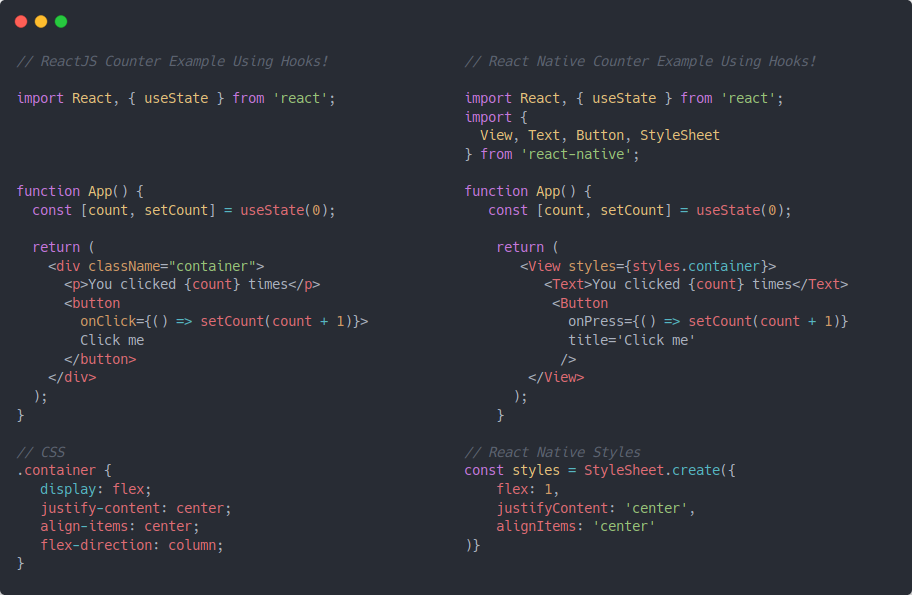 As shown in the image, there is no difference in handling the state between React and React Native. You can use the state of your components both in classes and in functional components using hooks!

In the following example we will show the same above counter example using classes.