This document refers to the architecture of the new renderer, Fabric, that is in active roll-out.

The render pipeline can be broken into three general phases:

The phases of the render pipeline may occur on different threads. Refer to the Threading Model doc for more detail. 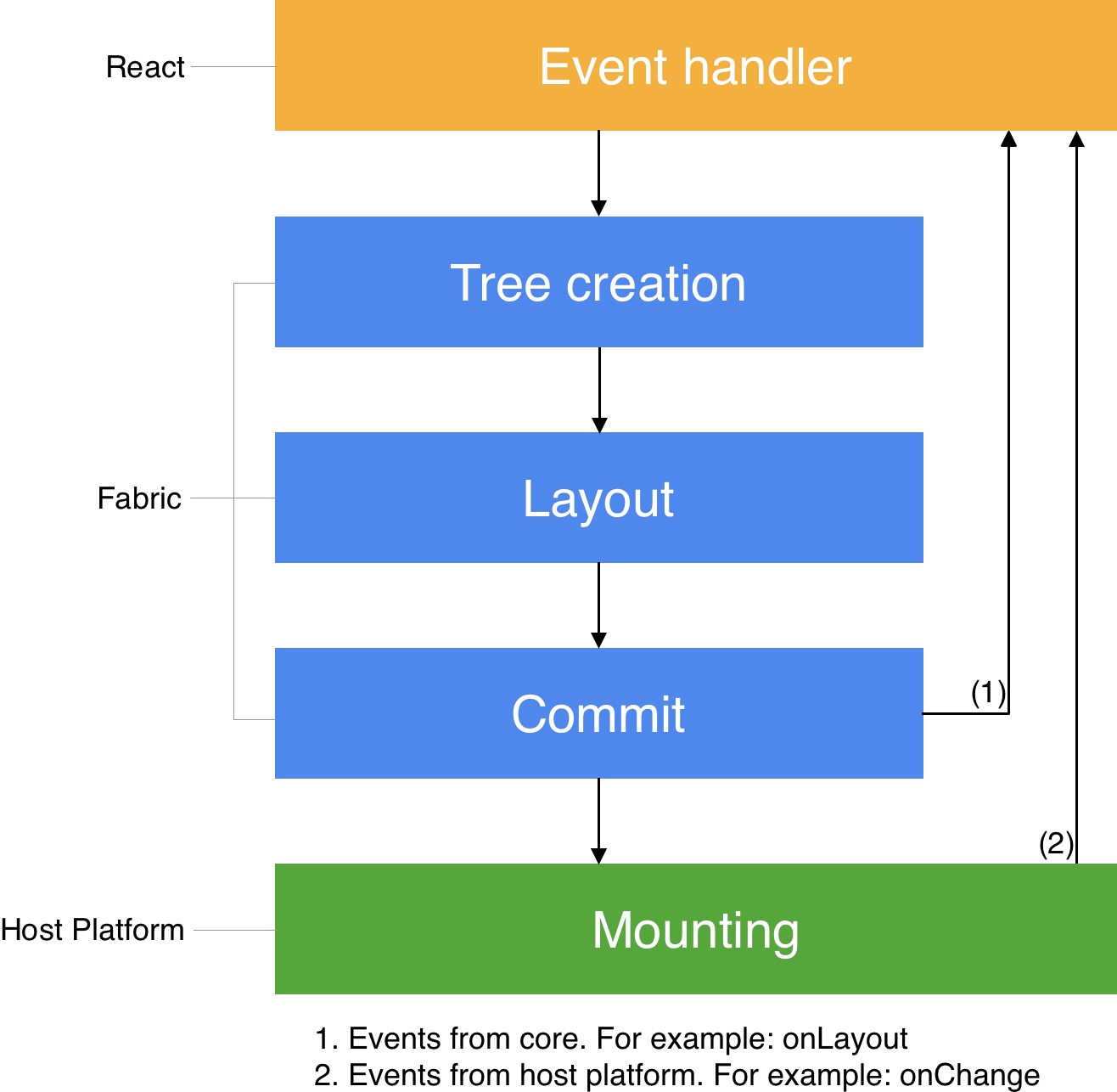 Imagine you want to render the following:

During this process of element reduction, as each React Element is invoked, the renderer also synchronously creates a React Shadow Node. This happens only for React Host Components, not for React Composite Components. In the example above, the <View> leads to the creation of a ViewShadowNode object, and the <Text> leads to the creation of a TextShadowNode object. Notably, there is never a React Shadow Node that directly represents <MyComponent>.

In the example above, the result of the render phase looks like this:

After the React Shadow Tree is complete, the renderer triggers a commit of the React Element Tree.

The mount phase transforms the React Shadow Tree (which now contains data from layout calculation) into a Host View Tree with rendered pixels on the screen. As a reminder, the React Element Tree looks like this:

At a high level, React Native renderer creates a corresponding Host View for each React Shadow Node and mounts it on screen. In the example above, the renderer creates an instance of android.view.ViewGroup for the <View> and android.widget.TextView for <Text> and populates it with “Hello World”. Similarly for iOS a UIView is created with and text is populated with a call to NSLayoutManager. Each host view is then configured to use props from its React Shadow Node, and its size and position is configured using the calculated layout information.

In more detail, the mounting phase consists of these three steps:

Let’s explore each phase of the render pipeline when the state of a React Element Tree is updated. Let’s say, you’ve rendered the following component in an initial render:

Applying what was described in the Initial Render section, you would expect the following trees to be created:

How is this update processed by React Native?

Let’s explore each phase of the render pipeline during a state update.

React Native renderer leverages structural sharing to minimize the overhead of immutability. When a React Element is cloned to include the new state, every React Element that is on the path up to the root is cloned. React will only clone a React Element if it requires an update to its props, style, or children. Any React Elements that are unchanged by the state update are shared by the old and new trees.

In the above example, React creates the new tree using these operations:

After these operations, Node 1' represents the root of the new React Element Tree. Let's assign T to the “previously rendered tree” and T' to the “new tree”:

After React creates the new React Element Tree and React Shadow Tree, it must commit them.

For most information in the Shadow Tree, React is the single owner and single source of truth. All data originates from React and there is a single-direction flow of data.

However, there is one exception and important mechanism: components in C++ can contain state that is not directly exposed to JavaScript, and JavaScript is not the source of truth. C++ and Host Platform control this C++ State. Generally, this is only relevant if you are developing a complicated Host Component that needs C++ State. The vast majority of Host Components do not need this functionality.

The Mount Phase is practically identical to the Mount Phase of React State Updates. The renderer still needs to recompute layout perform a tree diff, etc. See above sections for details.